The second of back-to-back cards at the Singapore Indoor Stadium on Thursday, Road to UFC 2 was a somewhat abbreviated affair thanks to one athlete dropping out.

Following weigh-ins for the event, UFC officials announced that Xiao Long had been forced out of his bantamweight fight.

“Due to illness with Xiao Long, his bantamweight bout against Min Woo Kim (135.5) has been cancelled from Road To UFC Episode 2,” the promotion said in a brief statement. “After making weight, Kim will advance to the second round of the Road to UFC tournament.”

As a result, Road to UFC 2 moved forward with just four fights, with Jun Young Hong vs. Koyomi Matsushima set to serve as the new main event. Among those to watch, young grappling star Takeru Uchida, entering the night with four straight wins under the Shooto banner.

The Road to UFC 2 card gets underway at 5:00AM ET on Thursday, June 9, 2022, live from the Singapore Indoor Stadium in Kallang, Singapore. Full results from the five-fight card can be found below. 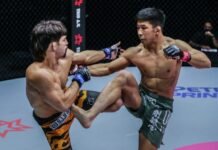