A pivotal fight in the women’s flyweight division is going down in August.

MMA Fight Universe was first to report the news that No. 5 ranked flyweight Alexa Grasso will fight No. 7 ranked Vivane Araujo on August 13 at a yet-to-be-announced UFC event. A source close to the situation confirmed the flyweight fight to Cageside Press.

Grasso (14-3) has been perfect since making the move to the flyweight division. In 2020 she defeated Ji Yeon Kim in her flyweight debut, and then last year, she took out Maycee Barber via unanimous decision. In her last outing, she submitted Joanne Wood at UFC on ESPN: Blaydes vs. Daukaus in the first round.

Araujo (11-3) is coming off a unanimous decision win over Andrea Lee last month at UFC on ESPN: Blachowicz vs. Rakic. She got back into the win column after suffering a controversial loss to Katlyn Chookagian at UFC 262. The Brazilian is 5-2 in the UFC and looking to crack the top five.

With a dominant win, Grasso could see herself next in line for Valentina Shevchenko and, if not a title fight, a number one contender fight.

The UFC’s August 13, 2022, Fight Night event does not currently have a venue, location, or broadcast plan reported. 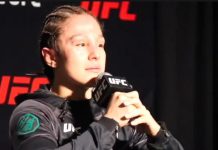