Bellator’s Lorenz Larkin may be the first fighter in the history of MMA to question why he’s ranked so highly.

Ahead of Bellator 280 on Friday, Larkin (24-7, 1NC) took issue with his #6 spot in the middleweight division, noting that he’d only fought in the weight class once — against a fighter no longer with the company.

After defeating former UFC fighter Kyle Stewart in Paris, via a first-round TKO, Larkin joked that they’d probably have him ranked #4 now, despite just having fought his second fight in Bellator’s 185 pound weight class. As for climbing the ladder? He could care less.

“I don’t care about that ladder, man. That ladder means nothing to me,” Larkin told Cageside Press following his win at the AccorHotels Arena. “I think number seven, eight, nine and ten, should be pissed off. I need to look at who they are, but the middleweight division, you guys should be pissed off. Because I’ve got no business being in front of you guys,” said Larkin.

Lucky for the rest of the weight class, Larkin doesn’t plan to stick around. “I’m going back to 70. I know I said this, this is deja vu, I said this last fight. I’m ready to get right back in there. I’m not hurt, I’m 100%, I’m ready to get another fight, and make my way back to welterweight.”

As for a shot at the champ at 185, Gegard Mousasi, Larkin will pass. “Gegard, I don’t want sh*t to do with Gegard.”

Earlier, Larkin explained that his fight against Stewart was potentially the most dangerous kind there was: against a fighter with nothing to lose. That was the case with Stewart, who had stepped into the bout on short notice.

“This is the most dangerous type of fighter. When somebody has nothing to lose and everything to gain, that is the most dangerous fighter. Because there are no regrets. As long as you just go in there and fight your ass off, there’s no losing about it. For me, it’s the worst type of fight to fight. But I’m not going to pull out of a fight because my opponent pulled out of a fight. This is my second fight like this. Like I keep saying, as long as I have a great camp, it doesn’t matter who it is.”

Watch the full Bellator 280 post-fight press conference with Lorenz Larkin above. More coverage from the event can be found below. 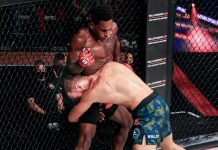 Lorenz Larkin “Pissed Off” Over Early Ending, No Contest at Bellator 283 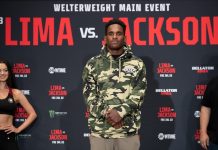 Bellator 283: Lorenz Larkin Explains Move Back to 170, And Why His Body Feels Better Than Ever