It’s been a while since we last saw lightweight Myles Price in the cage.

When Price (11-7) returns to action at PFL 3 on Friday, it will be his first fight in over three years. For those that have forgotten, Price last fought Peter Queally under the Bellator MMA banner. Queally would later fight for Bellator’s lightweight title; Price wound up on the sidelines.

Now, he’s joined the PFL, and makes his debut in Arlington, Texas on Friday against none other than Anthony “Showtime” Pettis.

“It’s an honor to be part of this promotion, and just super looking forward to getting in there, doing my thing, and performing and coming away with the W. He’s going to know he’s been in a fight, that’s for sure,” Price said during this week’s PFL 3 media day.

Price is a big underdog heading into the fight, and there’s no surprise there, given he’s up against a former UFC champ. He’s not dwelling on those odds, however, as they’re out of his hands.

“I don’t really care to be honest with you. Odds are just odds,” said Price. “I don’t have any control over what the odds are, the only thing I have control over is how I perform and what I do on the night. And that’s what’s important. Everything else is a waste of energy, and that in particular is I feel.”

One thing he can control, to some extent, is ring rust, which Price believes to be psychological, at least in part.

“I feel like I’ve mentally prepared for the ring rust per se. Ring rust I feel comes down to the physiological aspect, and a particular type of preparation in your training, that being hard sparring. I’ve been through the mill this camp. It wasn’t just a camp, I’ve been training in the meantime. Of course there’s still that little bit that you bring into the cage when you compete, but it’s well looked after in regards to the psychological aspect with myself. Because that’s a big part of my game, that’s one of my strongest attributes, is the mental game. So I’ve prepared 100% for it, and I’m looking forward to showing that on the night.”

Myles Price meets Anthony Pettis at PFL 3 this Friday, May 6, 2022, in Arlington, Texas. Watch the rest of Price’s media day appearance above. More coverage can be found below. 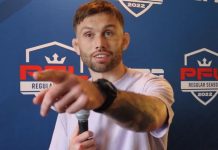