Joanna Jedrzejczyk is planning to finish her fighting career as a UFC athlete, Jorge Masvidal has been ordered by a judge to stay away from Colby Covington, and more in this week’s Sunday MMA Quick Hits.

Speaking of “hits,” well, we’ll start off with this…

Mike Jackson, Kicked in the Nuts

Say what you will about Mike Jackson vs. Dean Barry, but it’s no fun getting hit below the belt. Unless it gets you on TV. Which, it did. But, probably still not worth it.

Bob Arum Thinks Fury vs. Ngannou Will Be Easy to Make

Another kick in the nuts is hearing Bob Arum say he thinks Fury vs. Ngannou will be easy to put together.

“I don’t know what (Ngannou’s) contract situation with the UFC is,” Arum said. “Obviously, it’d be a massive fight, and it should be easy to make.”

Arum believes that because both the UFC and Top Rank Boxing air on ESPN, the deal should be possible. Never mind the UFC’s long history of preventing fighters not named Conor McGregor from pursuing extra-curricular activities.

Last week, we said we hoped the payday would be good for Dan Hardy and Diego Sanchez, who have signed on for an exhibition boxing match this July.

Turns out, it is. A very good payday, in fact.

“You could add all my paychecks together from the UFC and I’m still making more doing this,” Hardy said on The MMA Hour (via MMA Fighting) this week. He said a lot more than that, too.

Hardy is none too happy, in retrospect, with the pittance he was paid by the UFC.

“Can you imagine how much the skin suits sitting cageside were making off the fact that I was selling all those tickets for them?!” Hardy exclaimed. “That angers me right now. It angers me, the amount of money they’ve made off people like Diego, and these good promoters come along and put on shows and look after us in ways that we were never looked after by the promotion that was setting the stage for the sport as it is today. It’s embarrassing, to be honest.”

Ngannou: No UFC Return Unless Fury Part of Contract

Don’t expect to see UFC heavyweight champion Francis Ngannou return to the UFC unless a boxing match with Tyson Fury is allowed under the deal.

Ngannou appeared in the ring alongside Fury after the latter’s TKO win against Dillian Whyte, with the pair teasing a hybrid fight sometime next year. Fury has vowed to retire from boxing following the Whyte bout, but has left to door open for an exhibition contest against Ngannou, his UFC counterpart.

Fan interest is high, probably the highest it’s been for an MMA to boxing clash since “The Money Fight” between Floyd Mayweather Jr. and Conor McGregor.

As much as interest is high in Fury vs. Ngannou, it’s practically non-existent for Canelo Alvarez vs. Kamaru Usman. Yet the UFC welterweight champion, noted for his wrestling, has continually floated the idea.

Alvarez has responded, and who can blame him? Publicity is publicity, but this fight is frankly a bad idea for all involved.

Last week, Usman’s manager got in on the act, leading Alvarez to question who he even was. Shame he didn’t borrow an old MMA meme and go with the “who the fook is that guy?” line. Especially given the lengthy history between Usman’s manager and Conor McGregor.

No surprise here. Ryan Bader has found immense success under the Bellator banner, and the promotion has managed to use him as a star attraction in a way the UFC could never be bothered to. Now, ahead of his heavyweight title defense against Cheick Kongo in Paris, Bader has signed a new multi-fight deal with the organization.

.@BellatorMMA Heavyweight World Champion @RyanBader has re-signed an exclusive, multi-fight contract extension with the promotion – he defends his title next week in France against Cheick Kongo at #Bellator280 pic.twitter.com/2IdqNggLfO

The latest in the Masvidal-Covington criminal complaint:

That last point begs the question… just how on earth is Colby going to take him down? And why does it seem as if, when this case runs its course, Masvidal will be marketing himself as a fighter so dangerous, his fists are legally considered deadly weapons?

Check out this piece from MMA Junkie for all the latest on the case.

Speaking of new contracts, Joanna Jedrzejczyk has re-upped with the UFC ahead of her UFC 275 rematch with Weili Zhang.

Speaking to MMA Fighting on Thursday, Jedrzejczyk said it wasn’t all about money, and seemed to hint that she had left a bigger payday on the table. “I don’t want to go somewhere and fight for this bigger money. Money is not everything,” she told the site. “I’ve saved enough money for myself, for my kids, for my grandkids probably, but it’s not only about the money. You need to have this pride in you and you have to know what to do and how to prioritize some things. This is what I’m trying to do.”

Adrian Yanez took to Twitter to let fans know that he was fighting the urge to chow down on a bag of Flamin’ Hot Cheetos this week — and even got a response from Chester Cheetah.

The Internet is a wild place.

leave the fight for the octagon Adrian 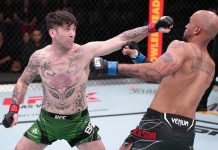