Bellator MMA officials subsequently confirmed to Cageside Press that Mamedov remains under contract with them, and had been granted permission to take a fight outside the promotion.

Dagestan’s Mamedov was last in action in January at Bellator 273, where he wound up on the wrong side of a split decision against former UFC lightweight champ Benson Henderson. The loss was Mamedov’s first since 2009.

Cedeno has not competed in MMA since 2019, and has lost four of his last six fights. He fought to a draw against Jason Novelli in 2016, and notched his lone win in that span against Pedro Gomes in July 2018.

Eagle FC 47 takes place on May 20, 2022 at the FLXcast Arena in Miami, Florida, and streams live on the FLXcast App. The following bouts have been reported for the event: 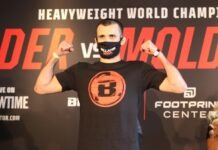