Most fighters say that you learn more with a loss than a win. For Bubba Jenkins, he was humbled after his loss in the 2021 PFL season.

Jenkins (16-5) returns this Thursday to the PFL for his second season. He lost a unanimous decision to Chris Wade in the semi-finals after being a slight favorite in his last outing. It was Jenkins’ first loss in five years and snapped a five-fight win streak.

“I was extremely disappointed. But mostly, I was humbled and hungry. That’s the two H’s that I walked away with after the loss. I was humbled, and then it was the urge to want to get back to that place, the drive,” Jenkins told Cageside Press in an exclusive interview. “So, to get that opportunity and let it slip like that, when it was my opportunity and to lose, it was definitely, definitely devastating. But I’ve been through a lot of things in my life. And, you know, it was one of the things that, you know, if it doesn’t kill you, makes you stronger…But yeah, I was humbled in that fight; I got humbled and ate a lot of humble pie, not only during that fight but afterwards. The Chris Wade fight was an eye opener, for sure.”

Jenkins also revealed that he was dealing with some personal problems leading into his semi-final fight. As a result, he felt like he was already defeated going into the fight.

“I lost that fight before I stepped into the cage,” Jenkins said. “But props to Chris Wade in doing what he did. I’m determined to see him again. You know, of course, we got the world title and we got the million dollars. Those are things to look forward to, but nothing would be better than running that one back.”

“I just had a lot of things going on in my life and wasn’t as focused as I needed to be. I wasn’t as humbled and in my place. I was fighting a divorce, fighting for my children, fighting this and that. So you know, it was a lot going on in the Bubba Jenkins life outside of the cage, and at that time, as much as the million dollars and the championship- there were just bigger things in life for me,” Jenkins said.

“Bad Man” fights Kyle Bochniak on two weeks’ notice this Thursday. He predicts a knockout. “I knock him out in one of two ways: either on his feet or on the ground, and a referee pulls me off.”

Watch the rest of our interview with PFL 2’s Bubba Jenkins above. 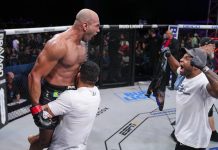