The fight went about as well as you’d expected, knowing that Jackson had last competed in 2018 against CM Punk. To say nothing of Barry’s modest 4-1 record to start the night. In fact, the only real surprise was how the bout ended — a disqualification win for Jackson, after multiple fouls from Barry.

Things went wrong early, with a low blow missed by the ref, but a second was clear as day: a spinning back kick flush to the groin. Jackson went down, writhing in pain, and was given ample time to recover. Chatting with the ref and talking to his opponent, however, drew the ire of the UFC’s commentary team, and Paul Felder in particular. It was a second foul — an eye gouge — that ended the fight, with Jackson unable to continue.

Barry, the culprit in both fouls, believes Jackson took the easy way out.

In a video posted to his verified Instagram account, and to his now-deleted Twitter page, Barry said that “to be honest with you, I thought he took the easy way out there. Didn’t want to stay, didn’t want to continue fighting.”

“Even when I kicked him low, he was talking on the ground to me for ages,” Barry continued. “If you get hits in the nuts, you can’t be talking like that. And same with the eye poke. Straight after the ref called the fight off, he was fine, both eyes open perfectly. He said he can’t open his eyes. Look, I’ll take the rematch in a heartbeat if they’ll give it to me, or just let me go back down to my weight division and fight. I thought I showed enough out there.”

Barry, who fell to 4-2 with the loss, has seen his wins come against opponents with a combined record of 15-33. Although to be fair, 30 of those losses belong to one single foe. Normally a lightweight, he moved to welterweight for the bout with Jackson, who was competing for the first time since his infamous 2018 bout with CM Punk.

The fight, originally a win for Jackson, was overturned to a No Contest when Jackson failed his drug test, testing positive for marijuana and its metabolites. Thanks to Saturday’s effort, Jackson is now 1-1, 1NC as a professional mixed martial artist. When not fighting, Jackson is media member, who has also done photography for promotions including LFA.

Barry issued a second statement on social media a short time after the video above, apologizing to Jackson for the foul.

“Sorry Mike for the accidental eye poke it wasn’t one bit intentional at all brother and wish you well. I’m feeling good just a little upset and frustrated at most it should of been a no contest but this happens. Again my apologies for the eye poke never meant it to happen I was seconds away from finishing the fight.“ 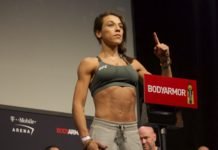