Honolulu, HI – After constantly picking at his opponent in the lead up to the fight Bellator bantamweight Raufeon Stots earned the interim title after a spectacular knockout of Juan Archuleta at Bellator 279 on Saturday night.

Speaking to reporters in his post-fight scrum Stots was clearly elated to have had the night go as well as it did.

“Yeah I’ve been back here, you know what I’m saying, I’m waiting to get a drink! But I’m doing great, I’m doing awesome! It feels surreal, like I can’t believe it, but I believe it at the same time because of the hard work I’ve done put in. I’m literally the best in the world. Like, I got proof now! I’m the best in the world and I’m grateful for all my team, all my coaches, all my family. I’m on cloud 9 right now,” Stots told reporters.

When the fight started Archuleta’s game plan seemed to be focused on pressure and taking Stots down which he was able to, but as the fight went on Stots was able to keep the fight standing. A head kick from Stots ended up being a knee to the head of Archuleta which ended the fight.

“The game plan was, we know he likes movement, we know he likes to go in and out. I was going to catch him on the front side, catch him on the back side. He also, TJ Dillashaw and all those guys kind of like to slip a lot. So I throw punches and then kicks behind it. (My coaches) said the same thing right before that round, let’s set up that same side kick and it worked perfectly.”

The win was the biggest of Stots career and sent him to the next round of the Bellator bantamweight grand prix.

“I came in as a favorite, but he’s challenged for the belt. What 3 times or something like that? He was a champion. I think I’m the first person to finish him, I think knockout, he might have been submitted earlier in his career. To get a win like that over Juan Archuleta that’s a huge win for me.”

One of Stots good friends is the current champion Sergio Pettis who pulled from the tournament due to injury. Stots said he does not mind holding onto the interim belt while waiting for his friend to return, but he’s not fond of fighting him.

“If I would have won a belt from Serg, like Serg is my boy. So it’s like me taking his girlfriend or something. That don’t feel good to me. This feels good to me. Juan Archuleta I didn’t really care for his bald head ass. I really didn’t care so this is does me justice. I’m on cloud 9.”

Pettis reached out to Stots via face time following the bout to congratulate his friend.

“Sergio just said he’s proud of me, congrats, amazing win. I said I’m going to hold on to the belt till he get back. I know he’s going to attack freaking injury like the champ he is. Yeah he’s just giving me love man, that’s my boy,” Stots said.

Still Stots isn’t oblivious from the fact that he may have to face Pettis in the cage at some point being in the same weight class.

Watch the rest of Raufeon Stots’ post-fight media scrum above and go to CagesidePress.com for more from Bellator 279 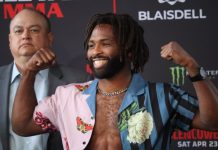