Danny Sabatello has been talking massive trash about his upcoming opponent. And Jornel  has finally responded.

When Bellator originally announced their 2022 Bantamweight Grand Prix, Lugo was not part of it. However, with some injuries and constant grinding, Lugo got his spot. More accurately, he has to fight his way into the tournament as he is currently in a wild card fight.

He faces Sabatello, who has been talking a lot of trash about Lugo. Recently, he told us that Lugo “sucks” and that he wants to see him bleed.

In a recent interview with Cageside Press, Lugo responded to Sabaello and said he is rotten to the core.

“Danny Sabatello is a different type of breed. He’s rotten to the core. Before me, before I’ve ever even heard of him, he’s been rotten. The first time I ever saw him, he was already carrying himself that way. Never wanted to touch anybody’s gloves, not saying you have to touch gloves, but like just really mean really nasty towards all of his opponents, always running his mouth,” Lugo said. “So, he’s somebody that I didn’t like since way back, you know, so I’m glad that I get to go in there and humble this guy.”

Sabatello’s trash talk isn’t getting under Lugo’s skin because he believes his opponent is just talking to talk.

“That is the kind of guy he is, and ultimately, at the end of the day, everybody’s entitled to their own opinions. I think he would say that no matter who he was fighting. He could be fighting Peter Yan or Aljamain Sterling, anybody, the best of the best, and he would say that they suck. He’d be fighting Jon Jones, and he’ll say he sucks at everything he does,” Lugo said. “This guy is gonna say whatever comes to his mind, you know, he says, ‘oh, I suck at stand up, I suck at grappling.’ Like, if you’ve seen me fight, are you serious? Or are you just making stuff up? He says, ‘I’m going to maul you, I’m gonna beat the crap out of you.’ Who have you mauled or beat the crap out of? If you are mauling people and beating the crap out of people, the crowd wouldn’t be booing you every time you fight.”

Lugo says he is going to stop Sabatello in Hawaii and advance into the Grand Prix.

Watch the rest of our interview with Jornel Lugo above. Lugo vs. Sabatello goes down at Bellator 278 on April 22, 2022 live on Showtime. 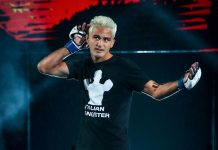 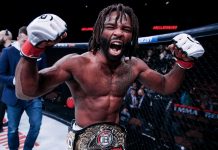