Women’s bantamweights were in action on the UFC Vegas 51 preliminary card, with Pannie Kianzad paired up with “Elbow Queen” Lina Lansberg.

Invicta vet Kianzad had recently seen a four-fight win streak snapped by Raquel Pennington, and was looking to return to the win column against Lansberg, who had lost her last bout to Sara McMann.

The fight was a rematch, with Lansberg having lost to Kianzad a decade ago, in her professional debut.

Some feeling out on the feet started out the bantamweight bout, before Lansberg and Kianzad moved to the fence, reversing position a couple of times. Lansberg added a few knees, and finally Kianzad reversed again and escaped back to center.

Lansberg, however, bullied her right back to the fence again. But Pannie would take a body lock from the back, hooking a leg as well. If the fight was to continue in this grueling, grinding style, that was the sort of approach Pannie would need. Lansberg, meanwhile, was stuck with Pannie on her back, or at least halfway there. Eventually, she went down, with Kianzad working all the way to the back. With a minute left in the round, Kianzad was in the driver’s seat, though a submission was never really close. She managed to land a number of strikes from the back, however.

Round two saw the pair go right back to the fence, but they didn’t stay there. Instead they worked their way back to center, then to the other side of the cage. Kianzad ripped the body with Lansberg against the fence and went upstairs before they separated again. Coming out of that sequence, Landberg was bloodied, badly. She pressed Pannie up against the cage, but couldn’t get the takedown; instead they traded knees. Off the break, the ref called time to have the doctor come in and check Lansberg’s cut. A quick examination, and she was allowed to continue — immediately driving in on a takedown attempt only to be reversed and put up against the cage once more.

Lansberg’s biggest moment came off the break, where, after an extended beatdown, she managed to fire an elbow that dropped Pannie, shortly before the end of the frame.

These ladies aren't afraid of a scrap 👊

Heading into round 3️⃣ on @ESPNPlus. pic.twitter.com/tX8CJbnqaV

In the third, it was right back to the clinch. Kianzad won that battle, firing a punch off the break. The pair then traded at range, both fighters landing. Kianzad landed, they clinched, and Pannie landed a knee. Unlike the first two frames, the bulk of round three would actually play out in the open. Both women would find success as the fight wrapped up, but Kianzad, by winning the clinch battles, beat Lansberg at her own game. 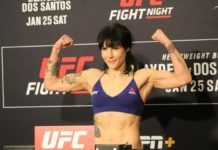 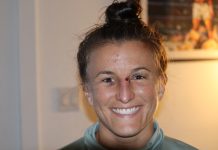