Making his debut on the UFC London card on Saturday was a supremely motivated Muhammad Mokaev.

It’s rare that a 5-0 fighter gets the amount of hype Mokaev has seen since signing with the UFC. But as a two-time world champion under the IMMAF in his amateur run, during which he went 23-0, there was a good reason many were high on the flyweight prospect.

It’s even rarer that a debuting fighter gets an opponent they personally called out, but that was the case with Cody Durden — who Mokaev called for following Durden’s controversial post-fight interview with Qileng Aori.

Both fighters ran to the center of the cage to get the fight underway. It wasn’t long before Mokaev landed a perfectly timed switch knee. That put Durden down in a flash, and Mokaev jumped in for the guillotine. Durden scrambled and with the choke still in Mokaev was in side control. The squeeze was tight and Durden was forced to tap.

WELCOME TO THE UFC @MUHAMMADMOKAEV 🤯

As highly touted as Muhammad Mokaev was, few saw the end coming that quickly, that decisively at UFC London. Now that he’s lived up to admittedly high expectations his next trip to the octagon will be must-see TV. 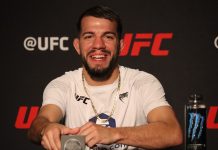