The immediate question for Phil Davis following Bellator 276 was, what’s next?

Davis’ off the cuff answer to that “what’s next?” question came in his distinct, wry style. “What’s next for me is a nice bath, two ibuprofens, and then we’ll go from there.”

Speaking at Saturday’s post-fight press conference, it was suggested he might have his eye on the winner of Vadim Nemkov vs. Corey Anderson. Or perhaps Ryan Bader. “Mr. Wonderful” has two losses to both Nemkov and Bader, both of whom have held gold in Bellator’s light heavyweight division.

“Gotta go up to heavyweight to fight Bader, and to tell you the truth, he looks fairly unstoppable at heavyweight. I hate to say it. I hate to say it, but I’mma call a spade a spade,” Davis said regarding “Darth” Bader. “So if he brings his butt back down, I got my chance.”

But at the end of the day, regardless of who he’s facing, Davis still loves the process of fighting. 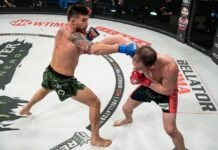