Three newcomers were set to make their octagon debut as part of the UFC Vegas 50 preliminary card — and first up was Dana White’s Contender Series winner Azamat Murzakanov.

The undefeated Russian light heavyweight was matched up with Tafon Nchukwi on the Fight Night card Saturday. A 2020 DWCS alum, Nchukwi entered the fight off a win over Mike Rodriguez.

Murzakanov in round one started off with light footwork bouncing in and out. He was landing big looping punches and getting back out of the way. Nchukwi stayed composed and was landing some good kicks. Nchukwi even landed a well-placed one-two that got the attention of Murzakanov. A few times Murzakanov tried to get the takedown, but it never came close. Nchukwi did land a few good body kicks backing up Murzakanov. The round ended with them clinching up.

A lot of kicks were fired in round two, all landing for Nchukwi. Murzakanov did catch a kick and counter with a punch sitting down Nchukwi, but he bounced right back up. It was Nchukwi pulling away with that jab and kicking to the body. Murzakanov was more aggressive on taking the fight down but Nchukwi had perfect defense. Nchukwi had a strong round two as it was visible that the body kicks, which were taking a toll on Murzakanov.

In the final round, Nchukwi came out firing with more punches and heavy kicks. He walked right into a left hook, and that backed up Nchukwi. Smelling blood in the water Murzakanov capitalized with a jump knee landing on the button for the clean knockout. 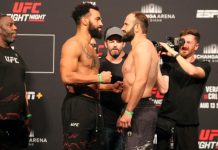