Magomed Ankalaev is looking to break into the title picture at light heavyweight, but he has to get through the always dangerous Thiago Santos at UFC Vegas 50.

In over 12 years as a professional, Thiago Santos has rarely found himself in his current situation.  The Brazilian powerhouse is coming off a strong performance against fellow bruiser Johnny Walker that snapped a three fight skid, but for the third consecutive time he has been matched as the proverbial stepping stone to a much younger upstart making their way up the rankings.  With the title recently changing hands and many expecting a potential turnover, a victory here remains crucial for Santos to not only stay in the title hunt but also to prove he has plenty of fight left despite being one of the division’s elder statesman.

“Marreta” has proven his mettle, and his power, many times over already.  Between runs at both middleweight and now light heavyweight, Santos has bested opponents such as former champion Jan Blachowicz, Anthony Smith, Kevin Holland, Eryk Anders, and Jimi Manuwa over the years.  A stoppage of Ankalaev would be a significant feather in his cap and it would come at a crucial time in the division.  With the fight between Blachowicz and Aleksandr Rakic expected to be rescheduled, and the title fight between Glover Teixeira and Jiri Prochazka coming in June, a stoppage of Ankalaev would poise Santos to potentially leap back into the championship conversation.

A rivalry you have to see to believe 😳

Notable for being one of the few contenders from Dagestan to be making their mark in the higher weight classes, Magomed Ankalaev has tasted defeat only once in 17 bouts and has been a part of the UFC since 2018.  Riding a seven fight win-streak, the only thing missing from Ankalaev’s resume so far is a signature victory over a perennial title hopeful as he looks to make his own breakthrough  That’s not to say he hasn’t been a part of notable bouts altogether, his battles with Ion Cutelaba garnered attention given the sequence of events from the first bout and their multiple cancellations before finally facing each other again in 2020.  Ankalaev prevailed in both bouts.

A breath of fresh air should he be victorious, Ankalaev is poised to book a potential title eliminator given the state of the light heavyweight division.  Unlike many of the other contenders populating the top five, Ankalaev has no losses to any of the other fighters in the field and as such has great leverage to move up in the coming months.  With the belt on the line in roughly three months, another high profile bout to propel him to a title shot in 2023 is likely in the cards should he look impressive on Saturday.

While Ankalaev is a well-rounded martial artist himself, his game plan should be to lure Santos into over-committing with strikes so as to be countered for a takedown.  Getting in-and-out in the early rounds effectively will be crucial and sitting down on more powerful shots should be saved for the later rounds when “Maretta” is not as explosive on the counterattack.  By comparison, Santos should look to lead the exchanges with short combinations, not expending too much energy early if he does not have openings to land damaging shots.  Should he execute the game plan effectively, he should be ahead on the scorecards and have Ankalaev weary of closing the distance for a takedown.

The future for Saturday’s winner will be largely dependent on the outcome of the upcoming bouts.  Should Ankalaev be victorious, then he is likely to fight the Blachowicz vs Rakic winner with a title shot on the line.  Should the latter bout take time to be scheduled, a title shot directly is not out of the question depending on the schedule of the Teixeira vs. Prochazka bout.  A Santos victory will likely see him face Blachowicz should the former Polish champion win his upcoming bout. 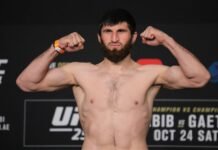 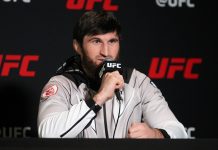