The ongoing Russian invasion of Ukraine has brought with it considerable financial damages for Vladimir Putin and his cronies — but Russian athletes have also been caught in the crossfire.

While FIFA has yet to ban Russia outright, the country will not be allowed to use their flag or anthem at upcoming events. Several opposing nations have also stated they will not play against the country.

Outside of soccer (or football if you prefer), the U.K. has also cracked down, with Member of Parliament Priti Patel announcing that visas for the men’s Belarusian basketball team had been cancelled, due to Belarus supporting the Russian attack on neighboring Ukraine.

One Russian fighter, however, has already seen a bout fall through due to his home country’s decision to spark a war in Eastern Europe. Welterweight Shamil Musaev, an undefeated prospect and former M-1 athlete, was expected to compete at KSW 68 later this month. However, on Monday, the Polish promotion announced that they had cancelled the bout in protest of Russia’s actions.

“Due to the Russian Federation’s invasion of Ukraine, KSW has made a tough, albeit ethically justifiable, decision to cancel Russian fighter Shamil Musaev’s fight, which was scheduled for KSW 68 on March 19th in Radom,” the promotion stated on social media.

Poland has been a staunch ally of Ukraine, taking in tens of thousands of refugees in mere days since the conflict erupted late last week.

Musaev (15-0-1), a.k.a. “The Silent Assassin,” joined KSW in 2019, and has posted a 3-0-1 record with the promotion to date. His last outing, against Michał Pietrzak last October, ended in a majority draw, marking the first time the Russian fighter did not have his hand raised in victory through 16 pro fights. 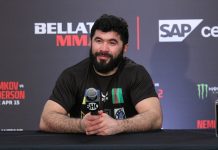 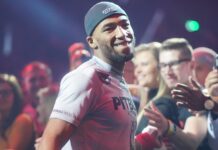