Nick Browne has felt like an afterthought through two Bellator fights to date.

That probably won’t happen a third time. The former LFA lightweight champ finished Mandel “Rat Garbage” Nallo at Bellator 274, with Nallo being a 2-to-1 favorite.

Browne, who improved to 13-1 with the TKO and has found the finish in both his Bellator fights, understands where the oddsmakers were coming from. “He had three Bellator to my one Bellator fights, so I can’t blame them too much,” Browne said following the event, speaking to media outlets including Cageside Press. “That just lifts me up a little bit more, being the underdog. Being a favorite, okay I’ve gotta go prove it. Underdog, I’m taking everything they give me, coming in hungry.”

It wasn’t just the oddsmakers, mind you. Ahead of the fight, much of the talk on social media was about Nallo. It was Nallo making a media day appearance; “NyQuil” Nick was noticeably absent.

“It’s just a motivation to be where these guys are, get that recognition that I deserve,” he told Cageside Press when asked about the perceived slight. “If it takes taking one by one down all the way to the top, that’s what I’m going to do. Keep pressing forward. I was down that first round, my body might have wanted to give up, but my heart said no. I kept pressing forward, got the finish. Happy with it, but there’s always stuff to work on.”

Browne will now look to make his return, “as soon as I feel healthy, good to go.” He’s hoping to fight twice more this year — though there might be some time off first. “I might splurge a little bit after this. Winners get to do what winners get to do.”

Watch the full Bellator 274 post-fight press conference with Nick Browne above. More coverage from the event can be found below. 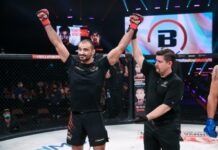