One of two fighters making their promotional debut on short notice at UFC Vegas 48, Jay Perrin had stepped into his bantamweight fight with Mario Bautista just a few days out — and successfully made weight.

The fight before the fight was won. The fight itself, early on the UFC Vegas 48 preliminary card, was another matter.

Bautista wasted no time getting the fight started by landing a good leg kick. He also threw two flying knees in just a minute. Perrin found home with a body punch but a return combination from Bautista followed. They would end up clinching up and Bautista landed some good short shots before getting a brief takedown. Perrin got right back up and then eventually separated. Perrin came forward and landed a good combo but was countered by a right hand from Bautista. A really nice takedown landed from Perrin but Bautista sprang right back up. More clinch work from both guys but it was Bautista getting the best of the exchanges including a shoulder strike. A high-paced round one that saw a lot of action.

Perrin in round two didn’t shy away from throwing his hands, letting them go. Bautista was getting hit but did a fine job countering every time. Bautista threw another flying knee that was super close to landing flush. That tied them back up in the clinch and Bautista got a brief takedown. Perrin did a good job staying upright but Bautista was beating him up in the clinch. Bautista was landing nasty elbows and body shots. Perrin did land a nice combo to the body and head as they separated though. Even though Perrin was busted up he still continued to come forward throwing solid combinations.

Round three saw Bautista came out chopping away at the lead leg of Perrin. He closed the distance with a right hand to clinch, and back up to the fence. Bautista landed a nasty knee to the body and was all over Perrin against the cage. From the short punches, the knees, the elbows, and the shoulder strikes Bautista was making it very difficult for Perrin. In the last minute, Bautista scored a textbook double leg takedown. As Perrin got back to his feet in the final seconds he ate a knee and an elbow to the face at the bell.

Credit to Perrin for showing up on short notice and making it a fight, but the clear winner was Mario Bautista. 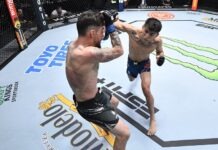