Bellator 274 will make a little history this Saturday, as will main event welterweights Neiman Gracie and Logan Storley.

The pair, ranked #4 and #5 in the weight class, respectively, will take part in the first ever five-round non-title main event for the promotion. For Gracie, however, the extra time is no big deal — he’d be happy to go old school and fight even without time limits, showing off the Gracie family mentality.

Asked whether he’d even need the extra rounds against Storley, Gracie (11-2) told Cageside Press during Thursday’s Bellator 274 media day that “It’s hard to say. He’s a tough fighter, we never know man, we never know. But I’m glad that we have more time, because I’m a Gracie, I like to fight longer fights. I’d like to fight even [with] no time limits if they let me.”

The added rounds haven’t changed his training camp much, Gracie added. “It changes a little bit, but not much. Usually I do more rounds than I’m supposed to, and this time was no different. I did six, seven, eight, ten rounds in a couple sparring sessions. So I’m used to it, and like I said, I like longer fights.”

Gracie showed last year that he’s more than just a dangerous submission specialist — though he is very much that. However, he also showed he can hang on the feet, putting away Mark Lemminger with strikes for the first TKO win of the Brazilian’s career.

So might we see more striking than expected at Bellator 274, as Gracie collides with the Division I All-American wrestler Storley? Gracie believes it’s possible. “Yeah maybe, I think so. I think there’ll be everything involved in this fight. There’ll be grappling, there’ll be striking, it’s going to be an all-around fight. It’s hard to predict things, but judging by the way he fights, I think there’ll be more grappling.”

Should he get the victory against Storley, Neiman Gracie knows there’s a lot riding on his performance — and on the outcome of some other upcoming welterweight fights, including Douglas Lima vs. Jason Jackson. Gracie’s last loss was to Jackson, and his own title hopes might rest on Lima getting the win there.

“It all depends on how big the win would be. If it’s a big stoppage, a great win, I think it puts me right there for the next title shot for sure,” Gracie said regarding the possibilities should he get the job done at Bellator 274. “It all depends also how the other fights play out. We’re just going to see what’s going to happen.”

Watch the full Bellator 274 media scrum with Neiman Gracie above. The event takes place this Saturday, February 19, 2022 at the Mohegan Sun Arena in Uncasville, CT. 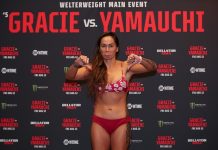