Former UFC 205lb champion Lyoto Machida was bounced from Bellator’s light heavyweight grand prix last year. Now, it appears as though he’s ready to leave the division behind him.

On Wednesday, promotion officials announced that Machida (26-11) would be heading back to middleweight for his next fight, against Fabian Edwards (9-2). The bout will be part of the Bellator London card on May 13.

Both fighters will be looking to snap losing streaks when they throw down this Spring. Machida has lost his last three fights, dating back to a split decision loss to Gegard Mousasi in 2019. After that, he returned to light heavyweight only to come up short against both Phil Davis and Ryan Bader, the latter as part of the ongoing 205lb tournament.

“The Dragon” joined Bellator MMA in 2018, after closing out his UFC run on a two-fight win streak. He would also win his first two bouts in his new home, picking up victories over ex-middleweight champ Rafael Carvalho and fellow UFC alum Chael Sonnen.

Fabian Edwards was on an impressive roll, starting his career an undefeated 9-0. However in his past two fights, the brother of UFC contender Leon Edwards has come up short against Costello Van Steenis and Austin Vanderford. Both fights went the distance. 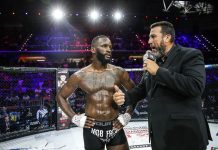