When Andrei Arlovski was stalking the elite of the UFC’s heavyweight division early in his career, Jared Vanderaa wasn’t even in high school. Yet the two would collide at UFC 271 on Saturday, a battle of fighters from very different generations.

At 29, Vanderaa is a young heavyweight; Arlovski, at 43, is one of the division’s elder statesman. But “The Pitbull” entered the bout off a pair of wins over two other fighters more than a decade his junior. For Arlovski, age was clearly just a number.

Arlovski found some success early, targeting the body and mixing in his kicks. “The Pitbull” found some success with his right hand as well, and Vanderaa, who had been hunting for an uppercut, finally opted to press the older fighter up against the cage, using his weight advantage to wear on Arlovski. Both men connected back at center; later in the round, Arlovski landed a spinning back kick that didn’t have much on it. A right hand, however, did land flush for Arlovski. A spinning back fist by Arlovski in the final seconds was blocked.

Round two opened with Arlovski on the outside, firing his right hand and catching Vanderaa. “The Mountain” could certainly take a punch, the question was whether they’d start to add up. Vanderaa then initiated a clinch up against the fence again, throwing a high knee. Arlovski had underhooks in, resulting in Vanderaa just firing knees until Arlovski reversed out.

Out in the open, Vanderaa whiffed on a high kick. Arlovski worked his jab, fired a high kick, switched stances, and landed a right hand — plenty of different looks. Vanderaa countered with a right; the action was then halted as Vanderaa landed low with a kick. Arlovski didn’t use much time, again landing a right hand as they got going. With roughly a minute to go Vanderaa looked for a body lock, pressed Arlovski into the fence, and was clearly thinking takedown. Arlovski, however, reversed; the duo traded knees before moving back to center.

Round three had Vanderaa tying Arlovski up against the fence early. But being blunt, that wasn’t going to win him the fight, with Arlovski almost certainly ahead two rounds. Every second off the clock was one second less in which Vanderaa could find the finish. Vanderaa walked Arlovski down more as the round went on, but Arlovski got his kicks going. They were active to the final bell, but more than anything the fight was a prime example of a modern-day Andrei Arlovski fight: lots of movement, plenty of kicks, stance switches, and surprisingly good cardio for a 43-year old heavyweight. 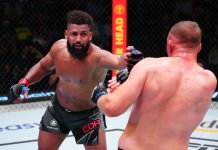