There was plenty of movement in ONE Championship’s heavyweight division at Friday’s Bad Blood in Singapore.

The main event crowned a new interim champion, with Anatoly Malykhin stopping Kirill Grishenko care of a highlight reel knockout to claim gold, double bonuses worth $100,000 U.S., and a shot at champ Arjan Bhullar. With the latter recently settling a contract dispute with the promotion, a title unification bout later this year is seemingly inevitable.

Earlier in the night, Bhullar’s fellow Canadian, Dustin Joynson, won a split decision against the previously undefeated prospect Hugo Cunha. Odie Delaney, meanwhile, submitted Thomas Narmo, and between the three fights, it was the biggest night for ONE’s heavyweight division in ages.

Full results and a gallery of highlights from ONE: Bad Blood are available below. 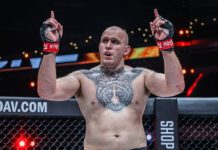 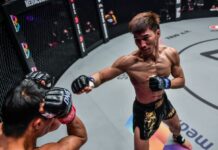 ONE 158: Tawanchai vs. Larsen Live Stream and Results