Anthony Pettis launches his own Showtime FC this Friday, and has a couple of hot MMA prospects worth keeping an eye on. ONE Championship, LFA, and others are also in action this week. Here’s a look at the top of the heap, prospect-wise!

Cunha reminds me of former UFC fighter Juan Adams in terms of style in the sense that he’s a bit sloppy on the feet but once he gets the takedown, he’s in his world. Cunha has stopping ability with big ground-and-pound using his size to stay heavy on top. He’s also very good at grabbing the neck. Cunha still needs a lot of work but is someone to watch for this year if he can fight more. He fights Dustin Joynson (6-1).

Capella is an action-packed fighter from Barcelona, Catalonia, Spain. Capella is constantly going to push the pace and be in your face. He’s a volume guy throwing purely combinations. He likes to get in the pocket and rip to the body and head. Capella can land that kill shot at any point having power in both hands. This is his first fight in almost three years. He fights Ago Huskić (8-3).

From Brazil, Almeida lives in Florida and trains out of Fusion Xcel Performance. Since dropping two in a row Alexander moved to the US and has won his next four. Alexander has a good ground game but likes to stand and trade. He likes to stay busy attacking leg kicks and throwing punches in front and behind his kicks. He has solid Muay Thai throwing short elbows and knees. The Brazilian brings a wide variety of skills to the table and has looked really good lately. He fights former UFC fighter Jacob Kilburn (8-5).

“The Bullet” has a ground game, but on the feet is where he is a fantastic fighter and is why he has made a name for himself. He has a lot of experience in amateur boxing and that has shown so much in his MMA career. He does keep his hands low, but it’s allowed his punches to be less telegraphed. He is always throwing constant volume and is incredibly accurate; his style reminds you of Nate Diaz. He fights Huseyn Aliev (12-4-1).

Moran is an exciting prospect who was a seven-time Sanda national champion. Moran is a smart technical fighter that can point-fight or shut the lights out. He’s someone that understands distance management. His right hand, jab, one-two and kicks are all things he does very well on the outside. When the distance is attempted to be closed on him, he’ll catch you with knees and counter strikes. He fights Joey Elzea (7-1).

The young Carpenter trains out of a top camp in the MMA Lab under head coach John Crouch. Carpenter was a USA junior National Muay Thai champion, a four-time Muay Thai National Champion, a junior Golden Gloves Boxing Champion, World junior Grappling and Pankration medalist, and an IBJJF World Champion in gi and no-gi. As expected with his experience across an array of sports, Carpenter puts it all together in MMA. He doesn’t do anything significantly better than the other, but he’s as well-rounded as they come for such a young fighter. He fights Windson Ramos (4-1).

Ribovics does a good job moving laterally, and coming in with different patterns. Ribovics has a variety of striking techniques sometimes leading combinations with elbows and uppercuts. The way he throws from different angles is nice to see. Also, his right hand is money when he lands it flush. As good as his striking is, he might be an even better grappler. His takedowns come from the clinch using trips and trapping his knee behind the leg, dumping his opponent down to the mat. Ribovics will then go for broke trying to get the finish or just a better position. He fights Franco Aranda (6-5). 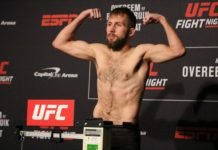 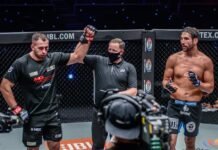