One of four Canadian fighters on the UFC Vegas 47 card, featherweight “Mean” Hakeem Dawodu was paired up with Ultimate Fighter winner Mike Trizano.

Dawodu had seen his five-fight win streak snapped in his last outing, dropping a decision to Movsar Evloev. Trizano, meanwhile, was looking to build off a win against L’udovit Klein in his last fight.

Round one was a relatively clean frame for Dawodu. He completely dictated the fight, as he found a perfect home for his calf kicks as well as a right straight. Trizano had a good jab going, but refused to follow up on it by throwing anything but the jab. Dawodu dominated the first frame, but Trizano showed some heart going into the second round. The first round also saw some insane output from the Canadian, as he landed over 40 strikes in the first five minutes alone.

Round two was more of the same from “Mean” Hakeem. His output from the first carried over into the second, as he began drilling away to the body of Trizano as well. Trizano tried to string together combinations but ate big shots nearly anytime he took a step forward. Dawodu’s beautiful shot selection paved the way to a big lead on the judges’ scorecards heading into the third and final round.

Trizano tried to bring the pressure in the final round, but Dawodu clinched his larger foe to slow down the pace. Trizano was able to score a big takedown and briefly got the back with a rear-naked choke attempt before Dawodu spun out and got back to the feet. After surviving the submission attempt, Dawodu began ripping to the body once again. Trizano had his moments in the final round, but it wasn’t enough to get the finish or sway the judges his way. 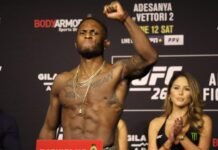 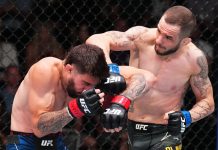