“The Mauler” is sticking with heavyweight, and will have a go at “Big” Ben Rothwell (39-14) when he returns to the UFC octagon this May.

On Tuesday, Cageside Press confirmed that Alexander Gustafsson (18-7) will face Rothwell at the UFC’s Fight Night card on May 21, 2022. FrontKick Online was first to report the news.

Gustafsson, a two-time UFC light heavyweight title challenger, made his debut as a heavyweight in July of 2020 against Fabricio Werdum. The fight did not go his way, with the big Swede submitted by the former heavyweight champ inside of a round. That contest, his first since ending a brief retirement, was his only bout of 2020. He did not fight at all in 2021.

Inducted into the UFC Hall of Fame — Fight Wing in 2020 alongside Jon Jones (the ceremony did not take place until the following year), Gustafsson is best remembered for his rivalry with “Bones.” He even attempted a return to the 205lb division last year, but was forced to withdraw from a scheduled bout with Paul Craig in September, citing injury.

Ben Rothwell will enter the fight looking to bounce back from a TKO loss to Marcos Rogerio de Lima in November. Overall, the former IFL champ is 3-2 in his last five fights, with wins over Chris Barnett, Stefan Struve, and Ovince Saint Preux.

The UFC’s May 21 Fight Night event is expected to be headlined by a women’s bantamweight bout featuring Holly Holm against Ketlen Vieira. The card so far breaks down as follows: 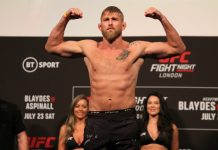