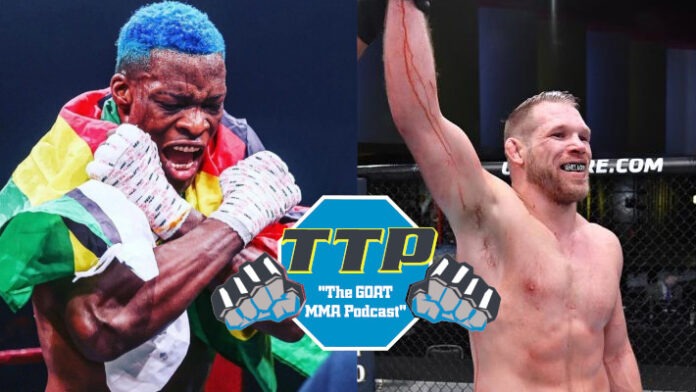 To kick off this week’s episode, we are joined by the man simply known as Blood Diamond. The Israel Adesanya teammate recently signed a UFC contract and is scheduled to make his debut at UFC 271, with an opponent to be determined. He talks about what it means for him to make a debut on a card headlined by his good friend and which includes fellow teammate Carlos Ulberg. Plus, Blood Diamond discusses how he wound up in MMA after spending quite a bit of time focused on a career in kickboxing. The story weaves through his time in Los Angeles working with Colin Oyama and his eventual return to the place he calls home.

It may not be the usual fight card that TTP breaks down, but this week Gumby and Shockwave decided to dig in. With Eagle FC debuting on American soil with more than a couple names you’ve likely heard of before, they’ve decided to give you their plays for the Khabib-led promotion. Follow along with the format you’ve come to know and love as they try to decide what to make of former UFC veterans like Ray Borg and Rashad Evans as they make their comebacks – and against game opponents. For this segment, all odds courtesy of FanDuel Sportsbook.

To close out this week’s show, we’re also talking to Jason Witt. Witt fights one week earlier than Blood Diamond on the UFC Vegas 47 show headlined by Jack Hermansson and Sean Strickland. He share his thoughts on his fight with Phil Rowe and how he thinks the grappling should shake out. Plus, he digs into the largest change he’s made to his training – one that he credits his win over Bryan Barberena to. The answer? Sleep. Find out why and how by listening in.