After an aborted attempt at pairing them off on the UFC Vegas 45 last month, the UFC finally had Raoni Barcelos and Victor Henry throw down on Saturday.

The bantamweight pair found themselves in the featured preliminary slot at UFC 270 in Anaheim. For Henry, it was his promotional debut — a tough one, but Henry proved up to the challenge.

Business picked up early between Barcelos and Henry. Barcelos appeared to have the edge on the feet, firing uppercuts through Henry’s guard. Henry did show some good head movement, and fired back, landing a solid left hand of his own by the time the midway mark of the round rolled around. Henry found some success to the body in the second half, but Barcelos also managed to hurt his opponent. Right hands connected repeatedly for Henry, Barcelos fired looping hooks from both sides; Henry answered with a kick.

Just a fast-paced opening round altogether, with Raoni Barcelos catching a kick and dumping Henry on his back in the final minute. The Brazilian allowed Henry back up, however, and paid for it, eating a slew of uppercuts to the body, knees in the clinch, and at least one solid blow upstairs. That likely cost him the round.

Starting the second, there was a question as to whether Barcelos was compromised, but he appeared to have recovered. He hit home with a number of uppercuts early, while Henry walked him down. Henry appeared light on his feet and relaxed, really mixing up his attacks. Barcelos was as well, finding success with his left hand. But as the round wore on, Barcelos was showing some damage to the face. And unlike Henry, he wasn’t kicking nearly often enough. As the round wore on, Barcelos had some success with the hands, but Henry continued to prove hard to hit, never staying still, and employing stance switches.

Perhaps with that in mind, frustrated with the lack of success on the feet, Barcelos changed levels for a takedown with about a minute remaining in the second round. Henry quickly escaped, just as he’d escaped Barcelos’ striking attacks through the first two frames.

As close as the second round was at times, Barcelos may very well have entered the third in need of a finish. Henry’s movement and boxing continued to look fantastic. Barcelos, face swollen, lunged forward on a few of his attacks. Henry worked the body, fired a kick to the midsection, then launched another combo upstairs. Barcelos was looking desperate as the round wore on, taking some big swings, and getting beat to the punch — quite literally — more often than not. Henry then locked a body lock in from the back, up against the fence, fired some foot stomps and knees, and put his weight on Barcelos. While it gave Barcelos a chance to rest, of sorts, it also ate up time off the clock.

This is an absolute SLUGFEST 😱

To his credit, Barcelos would hang in there, and tag Henry once or twice as the fight came to a close. But the lasting impression was the performance Henry put on in his debut — technical, precise, and absolutely thrilling to watch. 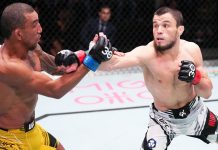 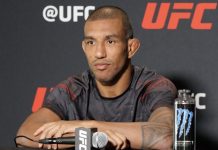