March 19’s UFC London card, the promotion’s return to the British capital for the first time since 2019, has a heavyweight main event set.

On Thursday, UFC President Dana White confirmed to ESPN, the promotion’s official broadcaster, that England’s own Tom Aspinall (11-2) would face Russian Alexander Volkov (34-9) atop the card.

Aspinall was originally set to face Shamil Abdurakhimov on March 19, but has been upgraded to the main event against “Drago.” The heavyweight from Atherton, Greater Manchester has been on a roll since joining the promotion in 2020, winning all four of his fights inside the octagon.

All four of those wins have come via finish; three have won Aspinall Performance of the Night bonuses. Most recently, the Brit defeated Sergey Spivak by TKO. Prior to that, he submitted ex-heavyweight champ Andrei Arlovski.

With Aspinall moving up, Abdurakhimov will now face Sergei Pavlovich.

Volkov, a former Bellator MMA heavyweight champion, has been on the cusp on title contention for years. The towering heavyweight, who stands 6 foot 7, won three fights in 2021, defeating both Alistair Overeem and Marcin Tybura. His lone loss came against Ciryl Gane, who would go on to win the interim title later in the year. 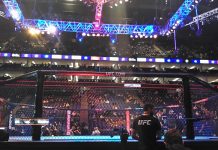