Cunningham (8-2) fought Javier Garcia at LFA 102 back in March. He lost a unanimous decision, which snapped his three-fight winning streak and spoiled his LFA debut. He also snapped something else in the fight— his leg.

“Like I said, I underestimated the Javier Garcia kid, and during that fight, we had no idea until f*cking like four or five months later that those calf kicks broke my leg, I got x-rays on it and everything. I was limping for like four or five weeks, and I had never broken a bone. I have seen UFC fighters take those calf kicks, so I was thinking it was nerve damage, and I just really messed it up. Finally, my coach made me go get it checked out, and I was thinking, ‘if it’s broke, there is no way I’m walking on it.’ Sure enough, it was broke,” Cunningham told Cageside Press in an exclusive interview.

After his leg healed, Cunningham was matched up with Fred Freeman at LFA 114; however, the fight fell through because Freeman needed more time to prepare, according to the fighter from Arkansas.

LFA let Cunningham fight in another promotion to stay active, and he went on to defeat Jonathan Jackson via split decision to end his year.

Five months on from their initial booking, Cunningham and Freeman finally will throw down at LFA 122. In “The Savage’s” mind, he already has a win over Freeman because he pulled out of their fight. Nevertheless, he envisions a head kick knockout.

The cousin of Bryce Mitchell says this will also be his reintroduction to the LFA crowd. He also revealed that the PFL has been looking at him as a potential fighter in their Challenger Series, so to say this fight has a lot riding on it might be an understatement.

Watch the rest of AJ Cunningham’s interview above. Cunningham vs. Freeman goes down this Friday, January 21, 2022 at LFA 122, exclusively on UFC Fight Pass. 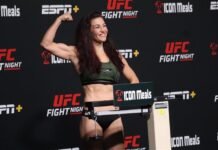 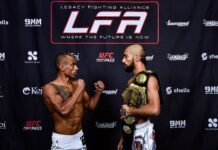 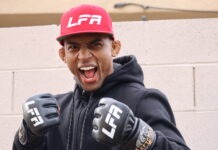