Calvin Kattar was on the right side of a beatdown this time around, outstriking Giga Chikadze for 25 minutes in the main event of UFC Vegas 46.

While Saturday’s UFC Vegas 46 card appeared to be coming apart at the seams ahead of the event, one fight that did hold together was the one that mattered most. That was the main event featherweight showdown between Georgia’s Giga Chikadze, and “New England Cartel” fighter Calvin Kattar.

Kattar had taken a year off after being soundly defeated last January by Max Holloway. In his return, he was getting a foe no less imposing in the surging Chikadze, winner of his first seven fights in the promotion.

Chikadze comes out of the gate with hard calf kicks, following that up with some smooth combos up top. Kattar attempts to pressure Chikadze but he refuses to give any ground which leads to hard body kicks. Chikadze gets a bit too aggressive giving Kattar an opportunity to secure a solid takedown, Kattar continues to maintain control for the rest of the round despite Chikadze making a valiant effort from his back. Kattar totaled over three minutes of control time within the first round.

Chikadze again wastes no time, switching up his striking. Landing heavy kicks to the body and then coming back up top forcing Kattar to switch his stance constantly. Kattar continues to put pressure on Chikadze in spite of this, landing up top over and over again, delivering impressive elbows. Both men throw caution to the wind and for the last 30 seconds of the fight give it their all with both landing absolutely brutal strikes. Kattar ends the round with an emphatic takedown.

Kattar continues to put Chikadze on the backfoot entering the third round, walking him down and applying pressure. Chikadze refuses to give to the pressure, pressing forward and landing some solid shots of his own. Kattar takes these shots in strides, getting in Chikadze range a delivering solid strikes despite seeming to slow down. Chikadze enters his first fourth round while having taken the most damage he ever has within the UFC.

The story of the fight through three was Kattar’s pressure and it’s no different entering the fourth. He refuses to give Chikadze any breathing room, giving non-stop offense, switching from his fundamental jab to devastating elbows that continue to cause massive damage. Chikadze shows his toughness and fires back despite the punishment he continues to receive.

Chikadze comes out with tenacity, but that leads to Kattar doing what he has done all fight. Kattar went on to land huge elbows at the 3:50 mark. Despite the huge fighting spirit of Chikadze, Kattar refuses to let him have any breathing room. Kattar lands over and over, including a massive spinning elbow at the one-minute mark and dropping Chikadze with ten seconds left, almost finishing the young star.

Kattar put on an absolute masterclass, giving out what he took in his last outing against Max Holloway, moving to 23-5. Chikadze may have had his seven-fight win streak snapped but showed that he is one of the toughest competitors in the FW division, showing that he has the heart to go into those championship rounds while taking punishment from one of the best strikers in the division. Both men should go home happy after giving us a 2022 FOTY contender on the first card of the year. 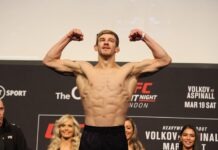