The UFC’s February 5, 2022 Fight Night event will have a strong Canadian contingent in action.

On Wednesday, UFC officials announced four bouts for the card. Among them, a previously unreported showdown between former bantamweight title challenger Alexis Davis (20-11) and Julija Stoliarenko (9-5-2).

After a drop to flyweight that saw her post a 1-4 record, Davis returned to the bantamweight division earlier this year, and has gone 1-1 thus far. In her return fight, the Port Colborne, Ontario native defeated rising prospect Sabina Mazo. Her second fight back didn’t have the same happy outcome; Davis wound up losing a unanimous decision against Pannie Kianzad.

Julija Stoliarenko has lost back-to-back bouts against Julia Avila and Yana Kunitskaya. The former Invicta FC fighter is in dire need of a win with that 0-2 record inside the octagon in mind.

Gordon’s manager Daniel Rubenstein had previously confirmed the date with Bondar following an initial report by MMA Junkie. Barriault vs. Njokuani was first reported back in September, during a Dana White’s Contender Series broadcast. Dawodu vs. Trizano was originally reported by MMA DNA.

No location, venue, or broadcast plan has been officially announced for the UFC’s February 5, 2022 event. The following bouts have been reported for the date thus far: 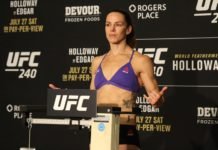