Las Vegas, NV — Heavyweight Don’Tale Mayes got the finish he was looking for at UFC Vegas 45.

It was a third-round TKO, with Mayes (9-4) trapping opponent and fellow Contender Series veteran Josh Parisian in a crucifix before pounding him out. In the end, however, those weren’t the strikes fight fans were talking about.

Rather, it was those strikes that had tongues wagging. Earlier in the fight, to put in nicely, Mayes appeared to attempt to finish Parisian with his pelvis. To put it less eloquently, he was basically throwing hump strikes.

“I was doing the north-south, I was like ‘sh*t, he’s right there, and it’s gotta hurt,'” Mayes said with a laugh when asked about that particular attack. Needless to say, it’s not something he practices in the gym.

“No, no, can’t say I do [practice them]. But he was right there. You know, by any means,” he added. While he didn’t win with the strikes, they certainly got people talking.

After starting his UFC run 0-2, Don’Tale Mayes is now on a two-fight win streak inside the octagon. That had his spirits up backstage at the UFC Apex on Saturday. “I feel good. And I just want to let everybody know, I’m the best heavyweight on this card. So you gotta put that out there. And if anybody else has got something to say, we can fight about it.”

If someone does have something to say about it, they’ll need to be ready soon. Mayes is hoping to fight again “as soon as possible,” he told Cageside Press. “They’ve got a January card, I don’t know if they’d let me turn around that fast, but February, March I’ll be ready.”

Asked whether he had any names in mind, Mayes suggested he was open to anyone. “I don’t turn down no fights. Every time they come with an opponent, I say ‘let’s do it.’ So really, whoever Dana [White] wants me to beat up.”

Watch the full UFC Vegas 45 post-fight press appearance with Don’Tale Mayes above. More coverage from the event can be found below. 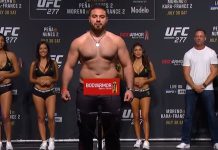