Weigh-ins for the final Ultimate Fighting Championship card of 2021, UFC Vegas 45, were a chaotic scene on Friday morning.

A full three fighters missed weight for the event, including one in historic fashion.

First up, the good news: Both Derrick Lewis and Chris Daukaus made weight, making the main event official. What’s that, you say? Heavyweights always make weight?

Not so fast. Earning the dubious distinction of becoming the first heavyweight to ever miss weight for a UFC fight, Justin Tafa came in at 267lbs for his fight with Harry Hunsucker. Previously, Greg Hardy had come in heavy on an initial attempt, but was able to make weight after being granted extra time to complete his cut.

No such luck for Tafa. He wasn’t alone on missing weight Friday, however. Macy Chiasson, who won The Ultimate Fighter 28 at featherweight then immediately dropped to bantamweight, missed the mark for her return to the 145lb division. She stepped on the scales 2.5lbs over the limit for her fight with Raquel Pennington.

Sijara Eubanks also missed weight for her flyweight bout with Melissa Gatto. Though just 1.5lbs heavy, it’s the second miss for “Sarj” at flyweight officially. That’s on top of being pulled from The Ultimate Fighter 26 finale, where she would have fought for the inaugural UFC women’s flyweight championship, were it not for a weight cut gone wrong.

Cageside Press was on hand in Las Vegas on Friday for the official UFC Vegas 45 weigh-in — results and a gallery of highlights can be found below. 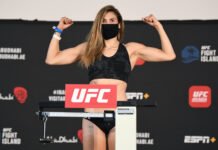 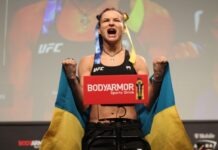