Las Vegas, NV — It isn’t just the fans who think Carla Esparza should be next for a title shot in the UFC’s strawweight division.

Angela Hill returns to the octagon on short notice to fight Amanda Lemos this Saturday at UFC Vegas 45. Lemos is riding a four-fight win streak and has finished her last two opponents in the first round, something she has done six other times.

Hill isn’t afraid of her opponent’s power, and says that Lemos hasn’t fought someone with her credentials.

“She’s super impressive when you watch the tape, but the one thing is that she hasn’t fought an elite striker like me. I’ve been in there with the best, I’ve dropped the best, I’ve hung with the best, you know? I don’t see her imposing any threats that I haven’t seen before. She is fast, she’s strong, and she has a lot of power in her punches, and I respect that about her,” Hill told the media, including Cageside Press at UFC Vegas 45 media day.

In a very crowded strawweight division and with the top of the division in a sort of a standstill, Hill believes champion Rose Namajunas should rematch Carla Esparza next or face Marina Rodriguez.

“[Marina] Rodriguez or Carlos Esparza. Either one of those would be fair,” suggested Hill. “Maybe Carla deserves it a bit more because she has been streaking a bit longer, and she has a win over Rose already. I think Carla should get it next, but if I were Rodriguez, I would probably just wait. Wait for that call because there is a good chance that one of them don’t show up, and you can slide in and get that fight.”

Watch the rest of Angela Hill’s UFC Vegas 45 media day above. More coverage of the event, which takes place this Saturday, December 18, 2021, at the UFC Apex in Las Vegas, NV, can be found below. 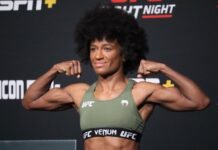