Four wins, four knockouts. Or three KOs and a TKO, if you want to get really technical. Regardless, Tuivasa’s recent success is one of the feelgood stories in MMA at the moment. He’s a jovial giant, after all, who has the fans behind him and who isn’t afraid to have fun. Case in point, his walkout track for his Saturday showdown with Augusto Sakai: Aqua’s 1997 pop anthem Barbie Girl.

Just why did the hard-hitting Australian heavyweight choose that song? “I’m a Barbie girl,” he deadpanned, eliciting an immediate reaction from members of the press backstage at the T-Mobile Arena in Las Vegas.

“You can’t tell me you don’t love that song. Come on! Everyone, that song comes on, you know you’re bopping. The crowd loved it, I loved it, the rest is history.”

If Tuivasa (13-3) wasn’t so entertaining as a fighter, he might just have a career in comedy. But his fighting career is going very, very well these days — a stark contrast from just two years ago, when he was mired in a three-fight slump.

The difference, said Tuivasa, is “just more learning. Learning and taking this job a bit more serious. Like I said before, I’m kind of learning on the run. Before the UFC, I was just fighting. Rocking up and fighting. I can fight. But to be a professional, it’s a whole other level, and I feel like I’m really enjoying what I’m doing, I’m really loving my work, and it’s showing. It’s showing once I get in the cage. And I’m maturing.”

As to what comes next for the new, mature — but still fun — Tai Tuivasa, he’s never been one to play matchmaker, and he’s not starting now.

“That’s not my job. My job’s to fight. I rock up and fight. We prepare to fight, hopefully these four consecutive wins and four knockouts get me in a better conversations for a bigger contract. I’m a prize fighter, I do this to feed my family and give my son a better future. So hopefully that gets me in that conversation, but as much as fighting comes, I’ll bang on with anyone.”

He’ll keep celebrating with shoey’s as well — something that impressed even wrestling legend Stone Cold Steve Austin on Saturday.

Watch the full UFC 269 post-fight press conference with Tai Tuivasa above. More coverage from the event can be found below. 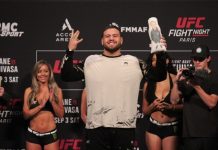