Las Vegas, NV — Former UFC bantamweight champ Dominick Cruz doesn’t remember being knocked down in the first round of his fight with Pedro Munhoz at UFC 269.

In fact, if you believe Cruz’s take following the fight, he thought he’d taken Munhoz down. “Last I know is, he’s on his back and I’m on top. I guess the rest of it, I conveniently don’t remember,” Cruz told media outlets following the fight.

Whether it’s truly a blank or not, Cruz knows his next two rounds were a much better effort. “I wanted the whole fight to be like rounds two and three obviously. I generally have it that way, but I think he also knew that his power and everything that he has is the most dangerous in the first round,” said Cruz. “So I think his team played a good game plan, is what I’m guessing. He came hard in the first, and he had good timing and good speed in the first, so I had to adjust a little to it. But once I got that timing and that speed, I adjusted well.”

With a second consecutive win under his belt, and a sizeable name thanks to his storied runs as WEC and UFC champ, Cruz already has plenty of suitors, including Marlon Vera and Jose Aldo.

That said, he’s choosing to live in the moment, rather than worry about future bookings he can’t control. The past can’t be controlled either, noted Cruz, though he did answer a follow-up on the controversy he sparked earlier this week — after saying he muted broadcast colleague Daniel Cormier when watching UFC broadcasts.

“The truth is, I love Daniel Cormier, he’s my brother. I work with him, I work alongside him, we are a team. He says I’m dry, I say I add a lot of seasoning, but I need him in order to be successful in that job,” said Cruz. “You can’t just have a one person booth. I need him, I need Joe Rogan, I need Michael Bisping, I need [Paul] Felder, I need all of them. So if you make a headline, make sure you say ‘Dominick Cruz needs the whole team.'”

Cruz was also queried on why he’s been able to find success despite years of injuries, while contemporaries like Joseph Benevidez and Cody Garbrandt have struggled.

“None of us know what’s going to happen before these fights. None of us. You can say whatever you want, but none of us know. So you just put in the work,” explained Cruz. “I put in the rounds, I put in the work. I show up, and I’m able to execute. It hasn’t always gone my way. I’ve got three losses. I learn a lot from my losses, and I make adjustments. Even my media, I’m speaking differently. I have a different view on this whole thing, this whole game after winning the title, losing the title, winning the title, losing the title. And then now they’ve got me down #9, just working my way back up the rankings.”

“It’s a humbling experience,” added Cruz. “Let go of the ego, be a team with everybody. I need the whole division to be who I am. And now as an analyst as well, I look at everybody as teammates. It’s different. I used to just see it as, I’m going to kill every one of you. And now I see it as, I need all of you to do anything. It’s just a different frame of mind for me.”

Cruz believes he’s had to rebuild that mindset due to the injuries and losses he’s incurred. “But I don’t know why other people haven’t been successful. I haven’t been part of their camps. I think Cody is a champion, obviously, in his heart and mind. I think he’ll get back on track, he’s still very young. Cutting down to 25, I don’t even know how that’s possible for him, but he made it work and he said it was easy. So I think he’ll be fine. Give the guy some time and let him find his bearings with his team, or whatever he needs to find. I’ve got nothing but faith in that guy.”

Watch the full UFC 269 post-fight press conference with Dominick Cruz above. More coverage from the event can be found below. 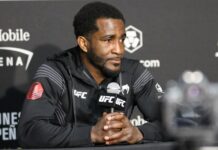