Opening up the televised preliminary card at UFC 269 on Saturday were middleweights, Jordan Wright and Bruno Silva.

Both men were looking to build off wins earlier this year, but it was “Blindado” Silva riding a six-fight winning streak into the event.

Fireworks were guaranteed in this match-up, and they were delivered. A glove touch by both fighters started the fight. A high kick from Wright missed. Two hard body kicks from Wright hurt Silva and he then rushed forward. Silva landed a couple of punches which made Wright clinch. Wright landed a knee that hurt Silva. Silva landed two hooks out of Wright’s Muay Thai clinch that wobbled Wright. Silva rushed him and pounced. Wright survived for a little bit, rolling for a leg, but Silva stayed on him, which forced the referee to jump in and save Wright.

Silva had a tremendous rookie year in 2021. After serving his USADA suspension, he has knocked out all three of his opponents: Wellington Turman in June, Andrew Sanchez in October, and now Wright. “Blindado” is definitely one to watch.

After the fight, Siva called for a ranked opponent, which he might get in 2022. Wright has now alternated wins and losses in his UFC career. 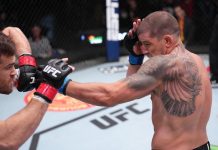