UFC veteran Mike Perry was in the broadcast booth for BKFC on Thursday night, an innocent enough role. But as is commonplace with “Platinum” Mike, trouble followed him even in his broadcasting duties.

Perry, who recently picked up a win under Triller’s Triad Combat banner and who has signed on to fight with BKFC, was confronted by Ultimate Fighter veteran Julian Lane at the event. Yes, that Julian Lane, of “Let me Bang, Bro” fame.

Lane has made the transition to bare knuckle fighter over the past couple of years, and has a fight upcoming in January. For reasons unknown, he began hollering at Perry from the seating section Thursday at BKFC Tampa, throwing papers towards him as well.

That led Perry to exit the booth and engage in a wild brawl, with the two eventually being separated by security.

Lane later posted footage of the confrontation on social media.

Perry went five years with the UFC, joining the promotion at UFC 202 in 2016. He would go on to compile a 7-8 record inside the octagon, but became a fan favorite for his knockouts and never-back-down approach to fighting.

At the same time, trouble seemed to find Perry where ever he went. Last year, he was accused of assault following an incident at a Lubbock, Texas restaurant. He also courted controversy by having his girlfriend, Latory Gonzalez, serve as his only corner for his 2020 fight against Mickey Gall.

Perry’s ex-wife, Danielle Nickerson, had accused him of domestic violence earlier that year. 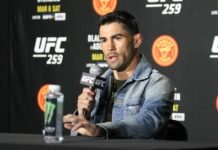