Las Vegas, NV — Dustin Poirier has been flirting with gold seemingly for years now. There was the interim title win against Max Holloway. Then the title unification fight against Khabib Nurmagomedov.

But an undisputed title has eluded Poirier (28-6, 1NC) thus far. He’ll get another chance to secure gold at UFC 269 this Saturday, opposite current champ Charles Oliveira.

That’s a name Poirier was happy to see claim the title; a situation he can relate to.

“There’s a list of guys that, when they won the belt, it was really special to me. And [Oliveira]’s on that list,” Poirier told media outlets including Cageside Press on Wednesday. “[Michael] Bisping’s on that list. Robbie Lawler’s on that list. Underdogs. The guys who, of course everybody’s fighting against adversity, but the guys who were counted out a couple times, and made it happen. And I’m trying to add my name to that list. That’s the goal here this weekend.”

The opportunity in front of him, to be champion, “gives me chills just saying it,” Poirier said. “I want it so bad, it’s very important to me.”

When he took the trilogy fight with Conor McGregor earlier this year over a shot at gold, Poirier was cognizant of the fact that the title could slip away. “I knew that, going into that fight. In the back of my head that was— I’m gambling on myself. Every fight is a roll of the dice, no matter how prepared you are. What we do is a crazy thing, this sport is crazy, but it all worked out.”

It did. In a way, Saturday may very well be a culmination of a journey that began back home in Louisiana for Poirier. And there will be some familiar faces on the card this weekend, with Tony Kelley and Matt Schnell also representing the state.

“It’s good to see those faces and be around those guys on fight week,” Poirier noted, adding he knows both fighters pretty well. “We’re a long way from the rodeo arenas we fought in in Louisiana.”

Watch the full UFC 269 media day scrum with Dustin Poirier above. The event takes place this Saturday, December 11 at the T-Mobile Arena in Las Vegas, NV. More coverage can be found below. 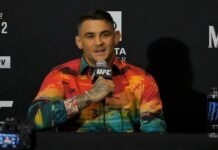