A pair of flyweights will make their UFC debut against each other in February.

ESPN Deportes was first to report the news that Victor Altamirano will fight Carlos Hernandez on February 26 at a yet-to-be-announced UFC event. Both fighters would confirm the booking on their social media.

Altamirano (10-1) won a UFC contract on the first episode of season five of Dana White’s Contender Series. He defeated Carlos Candelario via split decision. “El Magnifico” is riding a four-fight winning streak into his debut.

On the same season as Altamirano, Hernandez (7-1) also won a contract via split decision. He defeated Daniel Barez in the co-main event. Hernandez is on a seven-fight win streak since losing his professional debut.

With the flyweight division being fairly shallow, a dominant win could put the division on notice.

No location, venue, or broadcast plan has been officially announced for the February 26 event. Islam Makhachev and Beneil Dariush are expected to headline the show. 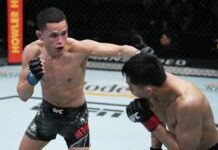