Las Vegas, NV — Brad Riddell and Rafael Fiziev put aside their friendship ahead of UFC Vegas 44 on Saturday.

Facing off in the co-main event, they had to. The lightweight pair had known there was a chance they could face off some day, and that day arrived sooner than expected.

After a back-and-forth battle that saw both men take damage, Fiziev (11-1) secured the win with a third round wheel kick KO — another moment for his highlight reel. Backstage, the Tiger Muay Thai/Sandford MMA fighter was clearly torn over the situation.

“I don’t know if I’m sad or I’m happy,” Fiziev admitted. “Because it’s not so good when you win [against] your friend like that. Of course I’m happy. And sad. And I’m happy. I don’t know.”

Starting the fight, Fiziev noted that he did feel uncomfortable, if just a little. “Not too much. Of course I understand, this is a real fight, maybe he’ll [knock me out], all this stuff. But it’s still a little bit uncomfortable.”

The wheel kick that ended it all wasn’t something that happened in the moment, but rather the result of Fiziev picking up on Riddell’s tendencies throughout the fight. “Not in the moment. I waited three rounds. I waited three rounds. When I started put him to the cage, his back to the cage, I saw when he goes right, every time he drops his hand. I just thought, I need to do back fist, or spinning back kick.”

As to what comes next, a long flight back to Thailand. And, added Fiziev, “I still need growth. I still need work.”

Watch the full UFC Vegas 44 post-fight press conference with Rafael Fiziev above. More coverage can be found below. 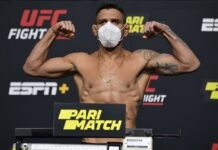