Las Vegas, NV – For UFC flyweight Manel Kape it isn’t whether or not he’s a champion already. If you ask him he is already the flyweight champion. He’s just missing the belt.

“It’s destiny. My father was a former world champion. I was a former champion too. This is a family. It’s like something that belong in my family, my blood and my destiny,” Kape said.

Kape finished Zhalgas Zhumagulov via TKO in the first round of their fight at UFC Vegas 44 on Saturday.

Earlier in his career Kape had weight cut issues that diminished his performances but some good advice from a coach helped him get back on track.

“I was super professional. I want to say thank you for the guys from PI. They helped me a lot on my nutrition, all the stuff UFC performance they helped me a lot. They advised me to start cut the weight more early. Not six days like I did every time but like two weeks. I was dropping very well, very healthy. They provided all the meals. All the things to cut my weight and recover very well.”

Kape wanted an early finish in this fight and was able to secure it.

“I feel like deja vu. This night I feel like a deja vu. Something that I did two months ago. Repeat all the same sequences, the combinations, this combo on the gym with coach Eric and Eddie Barraco. We did many times check his legs. Left hook, right cross. Every time. I think I repeat more than one-thousand times this combo. I knew that when I step in the cage this would be automatic.”

Kape sees a path to the title shot but he’s leaving it to his opponents to call him out.

We may have a superstar in the making at 125 pounds. 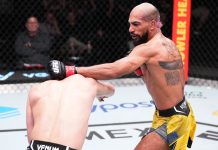