The 12-fight card was headlined by flyweight title fight, as bantamweight champ Stipe Brcic dropped a weight class, looking to make history by claiming a second title. Standing in his way was Brazilian Nuno Costa, looking to capture the vacant belt for his own.

Also on Saturday’s EMC 8 card, Konrad Dyrschka had been expected to compete for the inaugural EMC lightweight championship. With his opponent pulling out, Dyrschka was instead booked into a non-title bout, with featherweight champ Fabiano Silva stepping up on short notice.

EMC 8 kicks off at 1PM ET live at the Areal Böhler in Dusseldorf, Germany, with the full card available to stream via Fite.tv. Full results from the event can be found below.

Update: Due to a COVID-19 positive, Alexandr Cverna was forced to withdraw from Saturday’s EMC 8 card. He was replaced by Kornel Zapadka on a day’s notice. 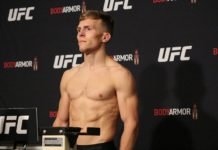