Lightweight Salkilld (1-1) was fighting with pressure on his shoulders at Eternal MMA 62. He lost his professional debut in February of this year, which really halted the momentum he had coming from his amateur career.

“It didn’t feel good, and I still think about it quite often. It pisses me off because I know I could have, and I should have beat that guy. He had an area of expertise, and I decided to fight him in that area where he had the best chance to beat me, and he did. It was a mistake, and I paid for it,” Salkilld told Cageside Press in an exclusive interview.

In his debut, Salkilld was submitted in the second round. Going into his second professional fight, Salkilld was nervous, of course, but he was confident that he wouldn’t start his career 0-2. He was also fighting someone who had faced his teammate twice.

Salkilld ended up defeating opponent Nicko Flessas via first-round submission, picking up his first professional win and getting the weight off of his shoulders. He also won in his hometown of Perth.

“It was quite a relief, to be honest. There were much more nerves than usual, especially leading up to the fight during fight week. I’m not used to that at all,” Salkilld said. “Now that I got my win, I feel like every fight going forward will be as normal. So I’m happy about that.”

While Salkilld is only 1-1 as a pro, he had a long amateur career where he went 8-3. The Australian is very experienced and is a lightweight prospect to watch in the Oceanic regional scene.

He plans to build off his 2021 and have the best 2022 possible. The 21-year old already has a date and opponent in mind.

“I went 50/50 this year but finished off strong. I’m ready to make 2022 my best year yet. I’m hoping to get on the February Eternal card and fight in Perth again. I want to be matched up with Tim Schultz. We were supposed to fight in August, but the event was canceled. He’s from the Gold Coast, so I want my shot at him,” Salkilld said.

Salkilld is another fighter who comes from a football background. He started playing Aussie Rules football at 18 but then transitioned to MMA after he joined a gym. “I became obsessed with the sport and have never looked back.” 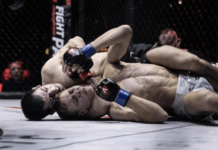