UFC heavyweight Jared Vanderaa will be stepping in on short notice to face Azamat Murzakanov next Saturday at UFC Vegas 44.

Late Saturday, UFC heavyweight Jared Vanderaa announced on social media that he would be stepping in on short notice to fill in for Philipe Lins to take on Azamat Murzakanov on one week’s notice for the UFC Fight Night on December 4.

Vanderaa (12-6) is looking to end the year on a high note and get back in the win-column.  After entering the UFC through Dana White’s Contender Series last year, the LFA veteran went 1-2 in 2021 with a win over Justin Tafa and losses to Sergey Spivak and Alexander Romanov, the latter of which he fought in early October.

Murzakanov (10-0) will be looking to continue his unbeaten streak after also having made his way to the UFC through the Contender Series.  After building his early career in promotions like Brave, ACB, and Ring of Combat, Murzakanov impressed UFC President Dana White with a first round finish of Matheus Scheffel to earn a UFC contract.  The fight with Vanderaa is his UFC debut and he will now notably, per Vanderaa’s post, be moving up to heavyweight for the bout.  His fight with Lins was previously set to be a light heavyweight fight and it is assumed that the move up is due to Vanderaa being a heavyweight and being unable to cut down to a catchweight on less than a week’s notice.

The December 4 event is scheduled to be headlined by a bantamweight bout between Rob Font and former champion José Aldo.  The event will take place at the UFC Apex in Las Vegas. 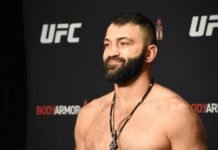 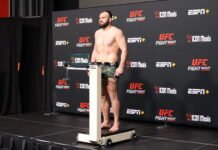