When Jonny Parsons makes his UFC debut, it will be at welterweight.

“He’s fighting at 170 pounds when he’s really a 155 pounder,” White told Laura Sanko. “He’s fighting in a weight class he doesn’t belong in.” After the fight, when asked about it, Parsons said he would get looked at by the UFC PI, and then he would make his decision.

Parsons told Cageside Press that one reason why the UFC President even brought up the situation was that there were talks of him fighting at lightweight for the show. Obviously, it didn’t happen.

After doing some research with the UFC Performance Institute for the past month, figuring out what weight will be the best for him, “The Sluggernaut” will be staying at welterweight. For the time being, at least.

“After having the PI do a scan my body, pretty much I’m .6% too much lean body mass to make 155. It’s possible, but it would be extremely difficult, and I wouldn’t be able to gain any muscle,” Parsons told Cageside Press in an exclusive interview. “So, I just feel like to get into the PI and have to starve myself and work out without gaining any muscle wouldn’t be the most ideal thing. I don’t plan on bulking up too much, and I’m not ruling lightweight out for the possible future, but for right now, I’m going to stick at welterweight and focus on eating well and working out hard.”

There are countless match-ups at welterweight for Parsons that would be absolute mayhem. Parsons wants to his UFC debut to be early 2022. Next month would be ideal if he had his way, but his management and coaches want him to have a full training camp for his debut.

Watch the rest of Jonny Parsons interview above, where he talks about his DWCS fight, the critics, and more. 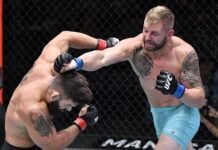