Flyweight Gillian Robertson made the trip out from sunny Florida to Elevation Fight Team in Colorado recently, in preparation for her upcoming fight at UFC 269.

It was actually a case of Robertson following coach Din Thomas, who was in Colorado to film a TV spot for the UFC.

“It was actually my coach, Din Thomas. He was filming with Dana White, Dana White’s Lookin’ for a Fight was out there this weekend. So I was just kind of following my coach,” she told Cageside Press in an exclusive interview. “While I’m in camp, I want to work with him as much as possible, and obviously they have a great team of girls for me to work with out there.”

That includes names like Miranda Maverick, Raquel Pennington, JJ Aldrich, Mallory Martin and others. “I’d hate to leave any more out, but there’s probably like five or six UFC girls every single day I was there. So it was just an awesome experience being surrounded by that,” said Robertson.

Being at altitude in Colorado also had an impact. “There’s definitely a difference! I feel like anywhere you go, coming from Florida, is altitude, being below sea level here. So going to Colorado, being a mile high, you’re feeling it a little bit, but it’s obviously good conditioning, especially being this close to a fight.”

Moving forward, Robertson is hoping to get more work in at Elevation. “I honestly would love to. The experience with the training, being surrounded by that, having so many good training partners around you all the time, and then also being in the high elevation, and I was lucky enough to have my coach with me too— so it was just good work all around.”

There was only one drawback — going from the beach setting to the chillier climate, “I’m definitely not prepared for it,” Robertson said with a laugh. After winding up on hikes a mile into the woods in crop tops and leggings, she admits that “a new pair of boots, maybe some fuzzy socks, and we’ll be good.”

When Robertson steps into the cage at UFC 269, she’ll do so against Priscila Cachoeira. The Brazilian stumbled out of the gate, losing her first three UFC fights before turning things around more recently, winning her past two.

“I feel like Priscilla, even in her losses, she’s still a dangerous fighter,” Robertson told us. When we spoke, the Canadian flyweight was actually reviewing Cachoeira’s fight with Molly McCann. “She still has a lot of power, and she’s still a danger no matter what, and obviously was able to really capitalize and prove it in her last few fights. I definitely think she’s a threat, but I feel like this is an ideal match-up for me, and one that I can capitalize on.”

What it comes down to is Robertson’s strong suit beating Cachoeira’s. “I feel like this is very striker vs. grappler. I just don’t see her being able to hold up with my grappling abilities, my wrestling ability, my jiu-jitsu. But I do see her posing a serious threat on the feet as well.”

Despite dropping back-to-back fights for the first time in her career, Robertson hasn’t strayed from the plan ahead of this one. “We just keep moving forward, we keep looking to the future. I’ve always had the same goal, so it doesn’t matter the path I take. I’m still headed towards the same goal.”

Robertson’s return at UFC 269 comes after what has been, by her standards, an extended layoff of over eight months — and she’ll be fighting right around the four-year anniversary of her debut with the UFC.

While she hadn’t been aware of that date coming up, Robertson added “that’s crazy to think of. When I fought for my UFC debut at the TUF finale, my hotel was right across the street from the T-Mobile. I remember I just had the perfect view of the T-Mobile for that fight. For this fight to be in the T-Mobile, that’s crazy that it’s the four-year anniversary there.”

“It’s still surreal to me that I am in the UFC,” Robertson added. “I think last week in Colorado, I had somebody who recognized me, they were a fan. They were like ‘oh I don’t mean to bother you—.’ It still surprises me that I have fans. It’s all just mind-blowing to me, the whole experience. I’ve loved every second of it.”

After four years of competing for the largest mixed martial arts promotion in the world, Robertson doesn’t have any real regrets. “The mistakes that I made are what made me today, and what makes me capable of performing and doing what I do today.” 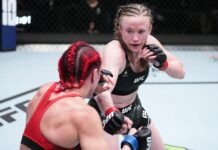 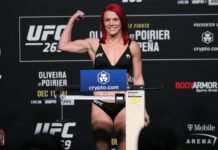