Ketlen Vieira saw her stock go up care of a win over Miesha Tate, and Sean Brady remained perfect with a decision win over Michael Chiesa. UFC Vegas 43 was one of the weaker cards of the year, but the outcome of several fights will impact their respective divisions. With that in mind, here’s what comes next for the big winners on the night.

A win over Miesha Tate still means something in 2021. It’s that simple. Tate looked good earlier this year in her return from a four-plus year layoff, and she didn’t look terrible against Ketlen Vieira on Saturday. In fact there’s an argument to be made that Vieira showed the ex-champ too much respect, especially during the early going of the fight.

Regardless, Vieira earned the decision win, and should move up a spot or two in the bantamweight rankings. It’s an awfully thin division these days, as Amanda Nunes has pretty much cleaned house at 135lbs. Julianna Pena is getting a title shot off a single win, but that should not become a trend. Vieira needs another win or two, but now you have a problem. Vieira just lost to Yana Kunitskaya, Pena has the title shot, Aspen Ladd may be a featherweight moving forward, Vieira lost to Irene Aldana in 2019, Holly Holm was most recently booked in a featherweight fight — and that leaves Germaine de Randamie, who is the #1 ranked women’s bantamweight in the promotion. GDR was supposed to fight Aldana recently, put pulled out due to injury. Since Aldana needs an opponent, let’s run that fight back and she who’s made the most progress in the past two years.

Sean Brady improved to 15-0 with his win over Michael Chiesa, and it’s safe to say he has arrived as a contender at 170lbs. Brady called his own shot after the fight, and suggested he take on the winner of Stephen Thompson vs. Belal Muhammad. Well, thanks for doing our job for us Sean! We like that fight.

Taila Santos is now 2-0 against Syndicate MMA fighters. She’s an impressive 19-1 as a pro, and has put together four straight wins in the UFC’s women’s flyweight division. That includes a win over former title challenger Roxanne Modafferi, who fought for the inaugural title, and now Joanne Wood, who was once promised a title shot only to see it slip away when she chose to stay active rather than wait for the fight.

There were questions about Santos’ quality of competition, but she has answered those. She also secured the only finish on the entire UFC Vegas 43 card on Saturday. Champ Valentina Shevchenko is constantly in need of fresh bodies, and Santos could easily be one.

Andrea Lee just put on a clinic against Cynthia Calvillo. Book these two, and the winner of Lee vs. Santos could get the next title shot.

At 37, Rani Yahya’s window in the bantamweight division is rapidly closing. He’s unranked, but wins more than he loses. On Saturday, he got past Kyung Ho Kang, making it two straight victories for the Brazilian. Frankie Edgar is 40, still just inside the top 15, and looked solid until he was caught by Marlon Vera earlier this month. Edgar has hinted at retirement but hasn’t committed, if he sticks around, this kind of fight could tell us a lot. And it feels a lot better than feeding “The Answer” to someone half his age.

The UFC’s newest bonus-winning machine (four post-fight bonuses in four fights) has a bright future at 135lbs. There is no better way to start your UFC career than what Adrian Yanez has done. Three Performance of the Night bonuses, and now a Fight of the Night against Davey Grant. Yanez is also an extremely likeable, well-spoken young fighter who fans are starting to treat as must-see TV.

Sean O’Malley actually suggested a March date with Yanez after the latter defeated Grant at UFC Vegas 43. That could be a heck of a fun match-up, even though O’Malley should probably start fighting ranked opponents. O’Malley is fighting Raulian Paiva at UFC 269 in a few weeks, and the winner of that getting Yanez actually sounds pretty fun.

Yanez’s next fight: winner of O’Malley vs. Paiva 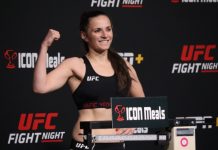 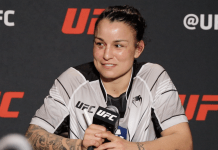