Las Vegas, NV — China’s Shayilan Nuerdanbieke picked up his first win inside the octagon at UFC Vegas 43, going the distance against Sean Soriano.

In terms of a return, “I don’t have a time frame in my mind,” he added, “but I just want to go back to adjust myself, adjust to this weight I’m fighting at and see where we go from that.”

Nuerdanbieke, who improved to 20-7 with the victory, also explained the origins of his “Wolverine” nickname. And no, it’s not based on the Marvel comic book character.

“It’s not really related to that Wolverine particularly,” Nuerdanbieke told Cageside Press. Instead, the featherweight (and former lightweight) really liked the idea of a wolf, seeing himself as being muscled and solid. “Wolverine in Chinese, when you translate it, means steel wolf, you know, very solid.”

Watch the full UFC Vegas 43 post-fight press scrum with Shayilan Nuerdanbieke above. More coverage from the event can be found below. 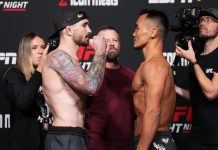 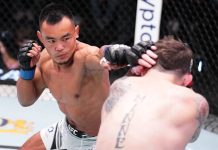