Japan’s RIZIN Fighting Federation headed to the southern prefecture of Okinawa on Saturday, visiting to the islands for the first time. RIZIN 32 brought with it standout super atomweight Rena Kubota (or just RENA, if you prefer), taking on Miyuu Yamamoto, sister of late Shooto, K-1, and UFC fighter Kid Yamamoto.

Kubota entered the fight on a three-fight win streak, and had fought all bout two of her professional mixed martial arts bouts under the RIZIN banner (with one of the other two taking place in Bellator in 2019). Another win or two, and she would be a lock to face current super atomweight champ Ayaka Hamasaki. Coincidentally, it was Hamasaki that Yamamoto had last fought, in a failed bid for the title in December of last year.

RIZIN 32 takes place Saturday, November 20 at the Okinawa Arena in Okinawa, Japan. The event will be streamed live in English via LIVE-Now. Full results from the event can be found below. 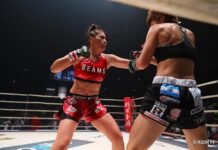